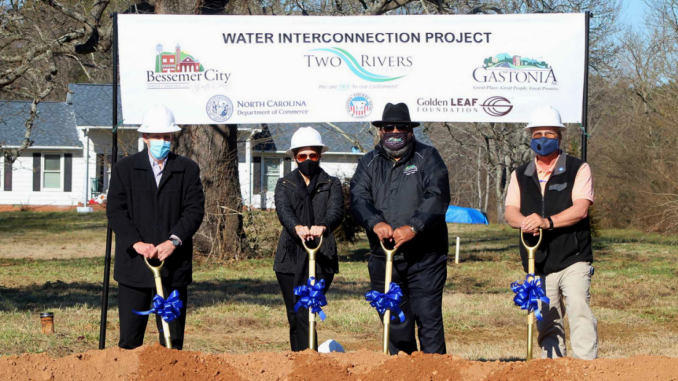 The City of Gastonia held a groundbreaking ceremony on January 28 for the construction of a water pumping station, located at 2660 Bessemer City Road, that will allow Gastonia to supply Bessemer City with up to 1.8 million gallons of water per day. The project is significant because it supports economic development in the region, particularly at the South Ridge Industrial Park in Bessemer City, and the interconnection of water systems gives communities the ability to handle droughts and other emergencies.

“Our long-standing partnership with Bessemer City makes projects like this one a success,” said Gastonia Mayor Walker E. Reid. “This project is important to our local economies and to our region.”

The project began when Bessemer City Road was widened in 2010. Gastonia’s water line needed to be relocated to accommodate the road work, and foresight by both municipalities led to increasing the line size in anticipation of a future permanent water connection with Bessemer City. “We are excited that this project will provide for the future needs of our residents,” said City Manager James Inman of Bessemer City. “And we are grateful for the grant funds to make it a reality.”

In 2017, discussions between Bessemer City and Gastonia began about constructing a permanent pump station. By 2018, Gastonia, Bessemer City and Gaston County entered into a joint funding agreement, after which engineering design work began. Bessemer City sought a $1.125 million grant from the NC Department of Commerce, which was awarded in 2019. The final project design was completed in 2020 and the project was put out for bid.

Once the final cost was known, Bessemer City sought additional grant funds for the project and was awarded an additional $200,000 from NC Commerce and a $200,000 grant from the Golden LEAF foundation. Both the NC Commerce and Golden LEAF grants are designated to support economic development. Bessemer City, Gastonia, and Gaston County are each contributing $158,000 in local funds (which is required by the grants).

“Golden LEAF is dedicated to the long-term economic advancement of North Carolina,” said Scott T. Hamilton, Golden LEAF President, Chief Executive Officer. “We are excited to be a partner in this project to create more than 150 new jobs in Gaston County.”

Construction for the $2 million project begins in February and is scheduled to be completed in first quarter of 2022.