The North Carolina State Bureau of Investigation is investigating an officer involved shooting incident that occurred in Bessemer City.

On Wednesday, June 16, 2021, at approximately 8:00 a.m., uniformed patrol officers with the Bessemer City Police Department were attempting to serve an arrest warrant on two wanted suspects at a home in the 100 block of Sunset Lane.

During the course of the event, officers identified an additional person at the location who they confirmed was also wanted on outstanding warrants.

When officers attempted to take the wanted suspect into custody, the suspect ran from officers. Officers pursued the suspect on foot for a short distance and commanded the suspect to stop and show them his hands.

The suspect refused the officers commands and made several attempts to appear he was retrieving something from his waistband.

Officers interpreted the actions of the suspect as an imminent threat and attempted to stop the threat by discharging their service weapons. The suspect was shot during the encounter and was transported to CaroMont Regional Medical Center and was later pronounced deceased.

The suspects name will be released as soon as next of kin has been notified.

No officers with the Bessemer City Police Department were injured in this morning’s incident. The names of the officers are temporarily being withheld pending appropriate family notification of the incident.

Both officers have been placed on administrative duty pending the outcome of parallel investigations. This is standard protocol anytime an officer discharges their weapon.

The SBI will be the primary investigative agency for this investigation. As is standard procedure with any officer involved shooting, the Internal Affairs Bureau with the Bessemer City Police Department will conduct a separate but parallel investigation to determine whether department policies and procedures were adhered to during the incident.

The investigation into this case is active and ongoing. As additional information develops, updates will be provided.  Any questions concerning the investigation should be directed to the State Bureau of Investigation. 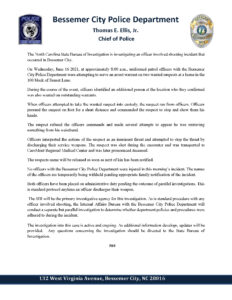