The City is in the process of creating a new development code, also referred to as a unified development ordinance (UDO).  This code guides growth in the community with development standards, land use regulations, and other guidelines.  The proposed code will be a formed-based code.

What Is the Zoning Map?
A development code is the legal ordinance that regulates development in a community.  In addition to the code, communities have a zoning map which indicates varies zoning districts in a community [City Limits and Extra Territorial Jurisdiction (ETJ)].  The zoning map indicates what type of zoning is allowed is various areas for growth and development.  The zoning map, including the rezoning of property, does not change existing uses or structures.  If a property is rezoned, the existing use does not change. The zoning map is a tool that aligns with a vision plan, which includes the community’s vision for future growth.  The zoning map is a tool to align with that vision and regulate uses in order to develop the community in a pattern that benefits the public’s health, safety, and welfare.

Am I Being Annexed into the Corporate Limits of Bessemer City?

A zoning map does not indicate annexation of property.  Cities do not have the authority to annex property without the request of the property owner.  Zoning and the extension of the City’s corporate limits (City Limits) are two different things.  Cities, like Bessemer City, have what’s called an Extra Territorial Jurisdiction (ETJ).  This is an area outside of City Limits where the City regulates land use and zoning.  More about ETJs can be found here.

How Can I Participate?

We encourage citizens to review the information on the BEE Ready Page HERE and participate in our survey below! 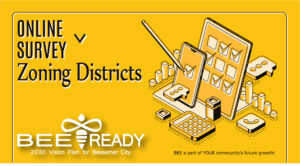 How Our New Zoning Districts Will Work